You might have noticed we have the London Mayoral and Assembly elections coming up in May.  This weekend we held the official launch of local candidate, and Newham Green Party Chair, Rachel Collinson, who is running as the candidate for City and East.

Assembly Member Baroness Jenny Jones presided over the launch, which took place in Shoreditch, by the proposed site of the controversial £800 million development of Bishopsgate Goodsyard. This proposal has been rejected by local residents as well as Tower Hamlets and Hackney Councils, and has also been opposed by the Green Party. 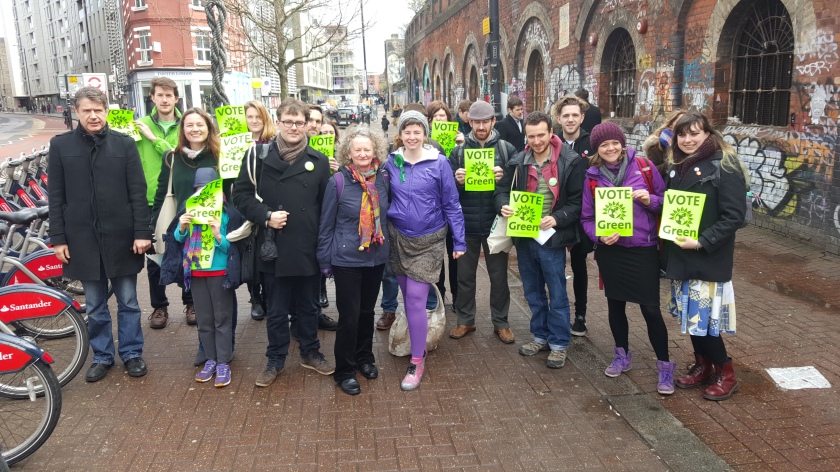 Rachel said “The controversy surrounding the planned development of Bishopsgate Goodsyard is a perfect illustration of what is wrong with London’s urban planning system. Boris Johnson is ignoring the wishes of local residents and both Tower Hamlets and Hackney Councils. A strong Green Party voice within the London General Assembly is crucial for redressing the mayor’s follies.”

We currently have 2 Green Party members of the London Assembly, Baroness Jenny Jones and Darren Johnson AM, who have worked hard to provide Londoners with civil partnerships, the Living Wage and a huge increase in the cycling budget, as well as helped design the new Low Emissions Zones. Just imagine what we could accomplish with even more Green members on the Assembly!

Green Party supporters were out in force, and we were joined by members from the boroughs of Barking and Dagenham, Hackney, and Tower Hamlets and the Young Greens from Queen Mary University. We had a fantastic turn out, and the weather was on our side – only raining after we’d finished our tour of the area and outdoor activities!

Jenny Jones AM, who has served on the Assembly since it was established in 2000, said “It’s great to see so many local Green Party members turning out to support the City and East campaign launch. East London has a vibrant and growing community of dedicated Green Party supporters, and if the enthusiasm on display here today is anything to go by, you can be sure they’ll be making their voices heard loud and clear in the run-up to the London Assembly elections in May!”

If you’d like to make your voice heard too, we’ve launched a crowdfunder campaign this week, to help us pay for the election deposit and campaign materials.

Rachel Collinson, is determined to provide a voice to the people of East London who share our vision to create an inclusive, prosperous, safe area for people to lead productive, well connected lives.

To do this, we need to raise money for our election campaign. This money will go directly to help us stand our candidates and ensuring our vision for a fairer future is delivered to every constituent. By building a Green voice in East London, we can capitalise on the current Green surge and work towards Green success throughout London.

Green Party members of the London Assembly have achieved great things, please help Rachel to carry on their work for a fairer, healthier London for all.