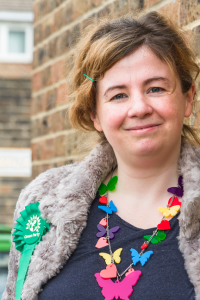 Newham Green Party Chair, Rachel Collinson, reports back from Newham Council’s August meeting of the Overview and Scrutiny Committee to follow up on concerns around recent council budget decisions.

“I know how this vote is going to go. If the motion was ‘the earth is flat’ councillors Rokhsana, Seyi, Kay and Susan would vote 4-2 for it,” thunders Lester Hudson, as he eyes the Overview and Scrutiny Committee meeting.   I’m so offended and shocked by this that I can’t help snorting, despite being in the public gallery.

Hudson continues as though nothing has happened. “If the motion was ‘Geoffrey Boycott is useless at cricket’ they would vote 4-2 for it.” Nobody’s laughing this time. His tirade continues: “I sincerely hope this time, common sense will prevail, but I doubt it.”

There is general uproar, and the female councillors who have been the subject of these personal attacks are rightly livid. (Later on I realise that John Gray – also a member of the rebellion against the Robin Wales regime – is spared the vitriol. Could it be that the Y chromosome is a safeguard?)

A chap to my left passes me a sheet of lined A4 notepaper, with “Attendance Sheet” scrawled at the top. There is a name and one signature on it so far. I pass it on without signing.

A few minutes later, an unnamed lady shouts “Has everybody signed the attendance sheet?”

“I’ve never been asked this before as a member of the public in a council meeting,” I say, annoyed. “It doesn’t say on it how the data will be used, so I didn’t.”

“I just need to know who is here,” she replies.

Well, that much is obvious.

This meeting has been called because Newham Council’s Cabinet have seemingly approved a dubious investment proposal without oversight of the Investment and Accounts Committee. Councillors heard about it in passing and were horrified. They have decided to ask the Mayor to reconsider spending £500,000 without due process.

Council Officers will not let members of the public (or even certain councillors) see more details of what’s proposed. All we know so far is that the Cabinet are attempting to reduce payments to the council’s pension fund – which already has a £238 million deficit – using a ‘Special Purpose Vehicle’. We understand that the council is using some of their buildings as security on a risky investment. How do we know it’s risky? Because their financial advisors are warning them against it.

It seems common sense to me that if the proposal were common sense, then the Cabinet would not resort to bending the rules to avoid scrutiny.

What I am seeing in action here is the Labour belief that Leader Knows Best, and democracy is merely a frustrating blot on the master plan. The belief that the people ought to shut up and take their medicine. The belief that is shown up at its worst in the Executive Mayoral system.

This is further confirmed when a member of the public stands up and questions whether the chair should be asking loaded questions of his own committee. The offender, Anthony McAlmont, says that members of the public are not allowed to speak, despite having allowed an earlier question. For some reason this breach of meeting protocol goes unnoticed by the Legal advisor present.

I hear the words ‘p&%$-up’ and ‘brewery’ emanate loudly from elsewhere in the public gallery.

With dogged persistence, the female Councillors draft a resolution that no more money should be spent until the investment and accounts committee has had a chance to review the proposal in more detail. In the end, the meeting vote is 5-1 for this motion.

Hudson warns this is a waste of time. What does he know that we don’t?

During this fiasco, I am reminded of the botched Labour leadership elections. You can vote for anything, as long as it’s the right choice.

As if to reinforce this, the Mayor rejects the motion day after.

And it’s almost reassuring to observe some councillors in utter denial of this growing trend. It means we will win, and soon.

If you’re interested in helping the Green Party challenge Labour’s one party state in Newham, do sign up here. (NB: We have a No Purge Promise™)